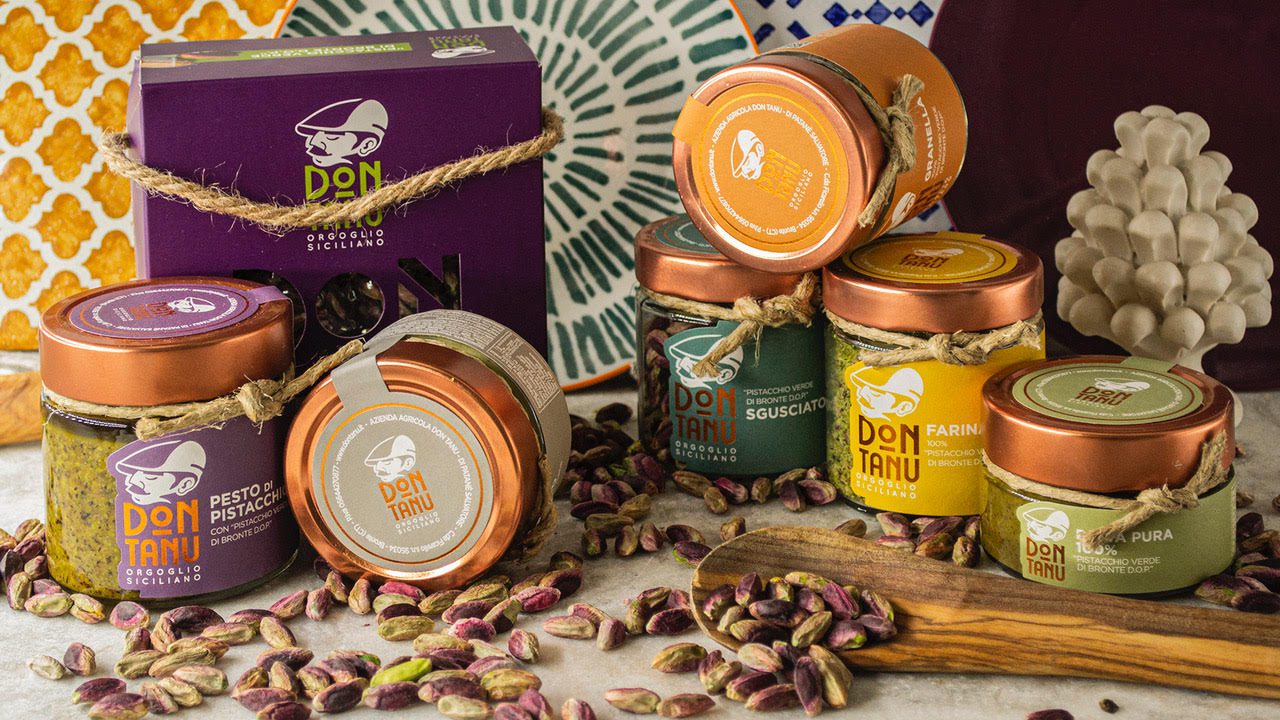 Ingredients: 100% green pistachios from Bronte DOP obtained from the shelling of the last harvest, on the western side of Etna. Naturally dried in the sun, natural, unsalted, not toasted, shelled. May contain traces of other types of nuts. Lactose free, gluten free, vegan.

Original gift idea – For any occasion, give a special box that tastes like Sicily to the eye and taste.

Ideal for your main course recipes like fresh pasta, meat or fish, salads, desserts, ice creams, cakes, crêpes but also to eat alone at breakfast, as an appetizer, or as a daily snack.

Don Tanu pistachios are born on the slopes of the volcano Etna, from the lava soil of Bronte- the city of pistachios- in the province of Catania, in Sicily, 800 meters from the sea. It is the climate and the land of the island that gives the pistachio the organoleptic peculiarities for which it is considered the most prized pistachio in the world. Pistachios from Bronte DOP have got a unique taste and aroma on the palate that is also unmistakable to the eye with their deep purple colour of the skin and the emerald green of the fruit, which explains why it is commonly called “the green gold” and why it stands out from all the other existing pistachios.

Pistachios from Bronte DOP are rich in nutritional properties such as antioxidants, vitamins, minerals and proteins. The mono and polyunsaturated fats present also help regulate the amount of cholesterol in the blood and; thus help the health of the cardiovascular system. It is also useful for the eyes and intestines, in addition to being delicious, pistachios are a real cure for the health. Produced with DOP certification, Don Tanu’s pistachios guarantee the authenticity of being a Sicilian excellence.

This website uses cookies to improve your experience while you navigate through the website. Out of these cookies, the cookies that are categorized as necessary are stored on your browser as they are essential for the working of basic functionalities of the website. We also use third-party cookies that help us analyze and understand how you use this website. These cookies will be stored in your browser only with your consent. You also have the option to opt-out of these cookies. But opting out of some of these cookies may have an effect on your browsing experience.
Necessary Always Enabled
Necessary cookies are absolutely essential for the website to function properly. This category only includes cookies that ensures basic functionalities and security features of the website. These cookies do not store any personal information.
Non-necessary
Any cookies that may not be particularly necessary for the website to function and is used specifically to collect user personal data via analytics, ads, other embedded contents are termed as non-necessary cookies. It is mandatory to procure user consent prior to running these cookies on your website.
SAVE & ACCEPT