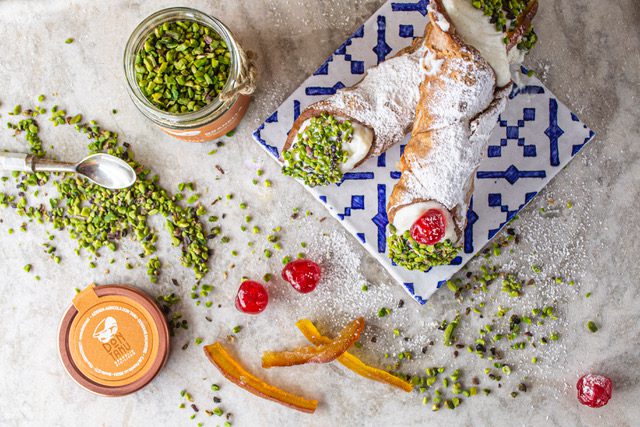 Posted at 19:29h in Recipes by dontanu

Start with the filling. First of all, make the ricotta as dry as possible, letting the ricotta drain in the refrigerator for a whole night, placing it on a narrow mesh strainer.
With the same strainer, sift by crushing the ricotta in a bowl, repeat this operation one more time to make the ricotta even more creamy. If it is particularly hard, you can soften it with a drop of milk or cream.
Add the icing sugar and mix well.
Now add the pure pistachio paste and mix to mix all the ingredients well. Cover the bowl with cling film and place it in the refrigerator for at least 30 minutes.

In the meantime, in a small bowl, mix the vinegar with the Marsala wine. Then in a large bowl mix the flour, icing sugar, cocoa all previously sifted, then the instant coffee, salt, lard, and egg. At this point, add the vinegar and marsala mixture. It may not be necessary to use it all, the amount varies according to the absorption of the flour you are using. Knead well on a work surface for about 5 minutes, until you get a compact and soft dough, with a fairly full-bodied consistency. Wrap the dough in cling film and put it in the refrigerator for at least an hour.

In a saucepan, heat the lard until it reaches 180 ° C, and cook the cannoli. When they have reached a golden color, remove them from the pot with the help of a slotted spoon, then place them on a plate lined with absorbent paper to remove excess oil. Let the Sicilian cannoli cool and then remove the cannoli shapes.

Take the filling from the refrigerator and sift it a few more times to make it creamier. Add the chocolate chips and mix well with the help of a spatula. Put the cream in a pastry bag with the large nozzle and stuff the cannoli. Cover the cream at the ends of the cannoli with chopped pistachios, sprinkle with icing sugar, and serve the Pistachio Cannoli immediately.

This website uses cookies to improve your experience while you navigate through the website. Out of these cookies, the cookies that are categorized as necessary are stored on your browser as they are essential for the working of basic functionalities of the website. We also use third-party cookies that help us analyze and understand how you use this website. These cookies will be stored in your browser only with your consent. You also have the option to opt-out of these cookies. But opting out of some of these cookies may have an effect on your browsing experience.
Necessary Always Enabled
Necessary cookies are absolutely essential for the website to function properly. This category only includes cookies that ensures basic functionalities and security features of the website. These cookies do not store any personal information.
Non-necessary
Any cookies that may not be particularly necessary for the website to function and is used specifically to collect user personal data via analytics, ads, other embedded contents are termed as non-necessary cookies. It is mandatory to procure user consent prior to running these cookies on your website.
SAVE & ACCEPT